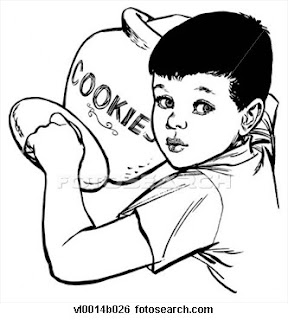 So we all know this parenting gig has some tough moments.

As my kids get older, have your typical childhood angsts and go through certain circumstances like peer pressure, broken hearts, hurt feelings, am "I" equipped to help?  Will I know the right way to advise them, the right things to say?  Will I even be able to help them with their homework?  Thank god for the internet, I guess.

Hopefully they will come to me for help.  I'm trying to instill in them now that they can tell me anything. I'm noticing though that my 5-year-old doesn't tell me everything right now.  For example, when Hubby & I ask him what he did in school on any given day, his response is usually "I don't know" or "Can we not talk about it?"  He's not a fan of school already...and he's only 5!  I take some of the blame for this as I was never, and am still not, an overly-scheduled mom.  I also sent him to a preschool that was not overly scheduled but a very go-with-the-flow kind of preschool.  I mean, there was a basic schedule but in no means were we bound by it.  I wasn't the type of mom who had to be home at 12:15 exactly so I could feed my kids and put them down for a nap.  My guys slept where they were.  Nothing wrong with moms like that; it's just not me.  I'm a big fan of spontaneity.  I think it's important to be able to roll with the punches, go where the wind takes you and not be overly rigid in your views or ways.

Unfortunately kindergarten is not like that.  And that's why perhaps my "spontaneity" didn't do him justice because he absolutely hates the routine of it.  Every morning they do "calendars" and his exact words about this was:  "Monday, Tuesday, Wednesday...blah blah blah...it's so boring!"  I can't say I blame him.  The same routine day in and day out drives me bonkers.

So that's one thing we need to work on.

This morning, as we were heading out the door to school, and as I put his lunch in his Lightening McQueen backpack that has seen better days, I noticed at the bottom a bunch of Lego pieces and one Lego guy that were not his.  When I asked about them, he instantly looked guilty and started to profusely apologize.  Yep, he had taken them from the classroom.  Not a major crime, but one nonetheless.  A little more than getting caught with his hand in the cookie jar.

I put his ill-gotten bootie in a zip-lock baggie and told him that he would have to confess tell his teacher what he'd done and say sorry.

He started to cry and kept saying he was sorry.  My bleeding heart would have liked to leave it at that, but I
I had to follow through.  Couldn't be "inconsistent" with this one.

Awww, but I felt for him.

Once we were in the classroom, I mentioned to the teacher that Big T had something to tell her and when she came over, he whispered in my ear, tears welling up in his eyes, "I'm scared."  I just told him he could do it.  He had to do it.

The teacher was very sweet with him and sat him on her knee.  At that point I stepped away so they could have their little talk.

Afterwards he seemed relieved that it was over and he put the Lego back where it belonged.  The teacher thanked me and called it a "teaching moment".  I said, "Yah, that's what I was going for."

(sigh) I know there will be many more teaching moments.  Hopefully not this one though.  And of course I wish I could take care of everything for him, but I know he'll need to make his own mistakes and hopefully learn from them.

Aww poor kid. Sounds like you handled the situation great, though

Thanks, Gia. I always feel bad when they get in trouble.

You handled that extremely well!

yeah for you and making it a teaching moment. As a pre-k teacher for 12 years I can tell you that many many many kids get caught with their hand in the cookie jar..or lego bin!

Thanks for telling me that, Robbie. Makes me feel a lot better! :)

I think that you did a fantastic job. Think of how many parents don't do that because of awkwardness. Really. You did the right thing and I'm sure that he learned a really good lesson. High five for Mom awesomeness.

Thanks, Lady! Thought I'd nip anything that might be getting started in the bud!

Well done! I think that was a fantastic example of some pretty darn good parenting. :)