Chef Jill In The House!

When I was single ... (why do so many posts start off like this?)

When I was single I used to cook.  I'm talking cooking "whole" foods.  I know, big deal.  Since becoming a mom though I've been slowly getting away from that, mostly due to the fact that no one eats anything I make anyways.  I have succumbed to the 'ol "if you can't beat 'em, join 'em" way of thinking.  I have become the processed food Queen.  (Well, at least still a Queen...guess that's something)

Let's just say I live with three people who are not exactly "foodies".  Wow, I'm so generous with my words this morning.  I was going to say I live with the pickiest eaters this side of the equator, but there's no need  to go there.  (whoops!)

Since I am so sick of eating frozen things out of a box and french fries are coming out of my ears, I have decided to get back to my single roots - of cooking, that is - for myself.  I will offer my delectable creations to my family hoping that one day they will partake and I can die happy, but for now I accept that I will cook for one...with enough for four.  It's a good thing we bought that deep freezer.

It's been great!  Of course I'm getting a lot of great recipes from Pinterest and some are just coming from my head, using what I have in the house.

I've also been trying a lot of gluten-free recipes.  I could definitely do without gluten in my life.

So here's some of my creations:


Just two of the meals above I got off Pinterest: the soup and the pancakes.  Click the links to get the recipes.  The other meals came from the tippy top of my head and what I had in the fridge.  I'm most proud of the brown rice & black bean one.  That was freakin' delish, I had no idea what I was going to do and when I saw the results, I couldn't  believe I was eating it all by myself!  Pretty nice looking too, if I do say so for myself.

It's that meal that makes me want to apply to Iron Chef.  There's no one better than me (or most moms) when it comes to multi-tasking in the kitchen.  Although I know we're not supposed to, I've got four different meals on the go every night...and it all gets to the table at the same time...usually.

So if they have an Iron Chef for Moms of picky eaters...don't bother applying for the show 'cuz I've got it in the bag - er...fry pan! 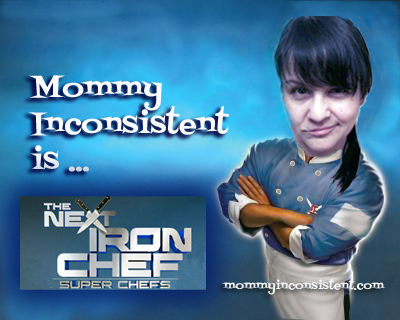 Posted by Mommy Inconsistent at 4:26 p.m.

I want all that food. Now please.

Any time, lady! It would be nice for someone to enjoy it with me. You bring the wine!

Look at you all artsy fartsy in your foods. Who knew. Hey wanna come to my house and cook?

Actually I'm pretty inconsistent...moi haha! If you promise you'll eat what I make, I just might come to yours!