Boys and bugs...what a combo.


Had a mini bug massacre on our patio the other morning.  It was Big T and Little K against a small army of rollie-pollie bugs.  Little K seemed to take on the role as Commander In Chief, calling out orders and "There's another one, Guy!" to which Big T (obviously the heavy) went all "Braveheart" on those poor unsuspecting little crawlers.  It was definitely an ambush as the bugs were just chillin' under our patio doormat.  They didn't see it coming and they didn't stand a chance.


So I have a few thoughts (no surprise there) when it comes to this.  My first instinct is to tell them that that's not nice...those bugs weren't doing anything to them...how'd they like it if the bugs did the same thing to them...it's hurting them, scarying them, etc, etc.  I want my boys to be compassionate men, afterall.  Usually that's my stance and I've been pretty firm about it in summers past when it was Big T alone smashing millipedes between two Hot Wheels.  What a summer of bloody carcasses that was.

Now that the weather's getting warmer (finally!) the bugs are arriving.  Obviously there were no survivors from last year to pass on the knowledge to others that ours is not the patio you want to venture on to.  Poor 'lil buggers...(haha...couldn't help myself)

And now I've become somewhat of a bug whisperer...self-proclaimed, of course.  I'm at a point now that if a bug or spider sets up camp in our place somewhere, I'm hiding it like Anne Frank until I can transport it to the safety of a nearby leaf or grassy knoll.   (Or if Hubby's home, get him to do it!)  Here's a pic of the spider that's currently hanging around our bathroom. 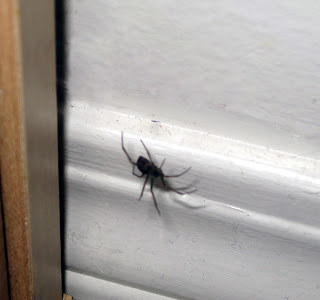 I'm calling her Emily.  Looks like a girl spider to me for some reason...or maybe it's because being the only female in this house, I need an ally.  The boys don't know about my little friend and I don't plan on telling them.  I haven't gotten around to relocating her yet, but she seems happy enough.  She comes and goes as she pleases, always coming back to her resting place.

I suppose there is one good thing about this situation and it's that the boys are working so nicely together and they're wreaking their havoc on something other than each other for a change.  Since they're going through quite the phase right now where they're screaming bickering about absolutely EVERYTHING, I'm kind of enjoying them getting along as they take part in their little "project".

So I'll keep up my own 'lil covert operation of rescuing what bugs I can and to the others I just have one thing to say...

"RUN FOR YOUR LIVES!" 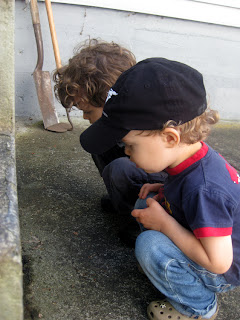 Posted by Mommy Inconsistent at 1:11 p.m.