As a mom of two boys, I'm a firm believer of letting them get dirty.  Big T sometimes wants to lie in the dirt and it's okay by me.  I've had some disagreements with Hubby, however, about what he considers to be my lackadaisical attitude when it comes to this, but I stand strong that if we're on our way to dinner, to a friend's house, school or some function then they're to stay out of the dirt, mud, etc  If it's just a day in the park, my attitude is to go for it!  In fact, I've pulled clothes out of the laundry bin for the boys if we're just going to the local park for a couple of hours.  Why dirty yet another pair of jeans?  And when I say Big T lies in the dirt, I'm not exaggerating...he actually lies in it pushing his cars around.


I'll always remember a couple of summers ago when my mommy friend and I were with the kids at a waterpark/playground.  Our two older boys were just about knee deep in a puddle of muddy water having a great time with their cars.  A bunch of kids with hunger in their eyes (and not for KD) stood at the edge of the puddle watching with what appeared to be such envy.  I think I saw one boy actually salivating!  In the background were the shrill voices of their mothers warning them that under NO circumstances were they to set even one baby toe into that mud pit.  We thought it was pretty funny.  I even felt a little bit proud.  What a cool mom I was not to worry about a 'lil (well, a lot) of mud.  And the boys had an amazing time.

There's only one flaw in my "dirty" philosophy and it's this: 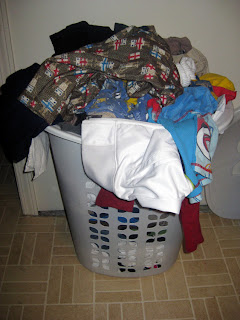