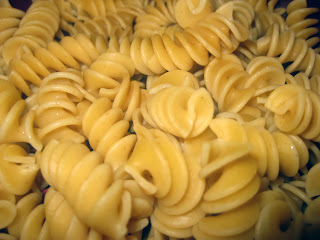 What is so scary about the above picture?  Because I can't for the life of me figure out why my 4-1/2 year old will not even try pasta.  A piece of spaghetti, rotini, fettuccini, macaroni, nor a variety of other noodles, has ever (and I mean never, EVER) crossed Big T's lips or even graced a fork he was holding.  He downright refuses to try the stuff.  I was told all kids loved pasta.  I feel so deceived.

So basically I don't need to tell you that when I hear moms say "My child is so picky and will only eat pasta", I want to shake them silly make sure they know how lucky they really are.  Wow, a world of pasta recipes would open up to me if he'd just try it...oh, and like it.

What makes kids (or my kids) so willing to try something that comes out of a crinkly bag, but won't try something put before them on a plate at the dinner table?  Is it the plate, the table, the person serving it to them who is trying (but failing) to act ever so nonchalantly like "It doesn't bother me if you won't eat this; your problem, not mine."  The books tell us to act this way, to basically act like you don't care when inside you're wringing your hands, begging, pleading with the 'lil dictator to "Just take a little bite.  I know you'll like it!"  And of course once you've said those words out loud, you've really lost the battle.  You've played right into their controlling, little hands.

When Big T was younger I always thought maybe he'd try banana bread if I put some in a chip bag.  But of course I know he'd never fall for that.  And I guess I'm kind of happy he wouldn't...he's definitely not stupid.  Nothing gets by this food critic.


So here's the thing that has me scratching my head to the point I may need to wear a tuque to hide my hair loss.  He won't eat pasta, but he'll eat: 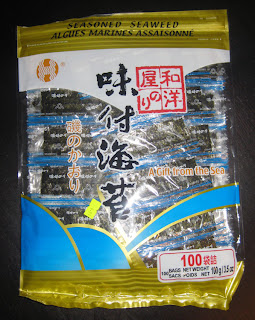 SEAWEED!!  He LOVES seaweed!!  "A Gift from the Sea" as stated on the package.  Is that not bizarre?!?  He practically begs for it and I have to stop him from eating it for fear he may grow fins!

Little K on the other hand does not like it at all.  It's ironic funny to watch Big T try to get him to taste it.  "Come on, just try it...it's nothing...it's just seaweed!"

I am happy, though, that Big T likes something that is actually good for him.  And if there's ever a nuclear disaster, with all the iodine in the seaweed, he'll be one of the survivors.

Once again, the glass is half full. (Hey, I'm trying)