As exhausting as it is dealing with my boys when they're not getting along, the times that they do get on well together - which is quite a lot actually compared to other siblings I know - makes up for it.

Today was one of those exhausting days.  The kind of day where having to go to work at night after a long day with the boys didn't suck quite so much.

They had been especially getting on each other's nerves until late this afternoon.  I was in my room folding laundry and I heard some conversation between them.  They were watching a DVD and 'Lil K was asking Big T  (or "Guy" as he likes to call him) what was going on.  Big T was calmly and patiently and dare I say lovingly explaining the scene to 'Lil K.  Not a big deal to some, but for most of today I heard them yelling "NO" to each other, so this particular occasion was music to my ears and warmed my sappy heart.

Awww, I love my sweet boys.

And personally, I don't think it had anything to do with the fact that I finally gave in and gave them the Ring Pops that they recently got from a birthday party.

Nope, that had nothing to do with their sudden camaraderie.

And, yes, I am delusional. 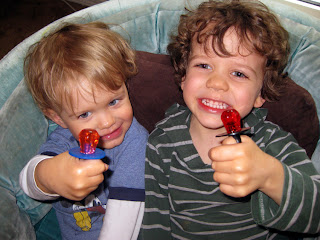 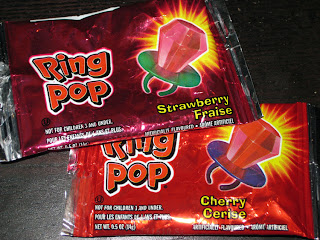 Sweet Jill, I'm glad you are savoring every moment because it goes by too fast....and I know I sound like a little old lady but it is true! xo chi

Thanks, Chi! I know, we have a Welcome to Kindergarten today! It's crazy!