You Know You're Getting Older When ...

There are a number of things these days that make me feel old...

1) Getting off the couch, hearing a creaking sound and limping for the first few steps ...

2) Working with people who have no idea who The GoGos are ...

3) Hearing myself telling Big T to turn his music down ...

But nothing makes me feel this way so much as what happened today when I took the boys to the Aquarium.

When we first got there I thought it would be a good idea to put our coats and snack bag, etc, into a locker so I wouldn't have to lug them around with me.  I had my suspicions that this might be a bad idea when I noticed that on the locker it said "$1 x 2".  (Pricey!)  It's the kind of locker that they have at our local swimming pool that only costs a quarter and then you get your money back when you retrieve your things.  Well, I knew there'd be no money coming back to me out of these lockers, but in went my $2 anyways.  My inner voice was telling me that as soon as I put the stuff in, the boys would desperately want a snack.  (Mental note:  always listen to inner voice)

As suspected, it didn't take long 'til Big T had to have a snack!  And frankly I thought it was a good idea because they both had decided to stop listening and things were starting to get hairy.  Snacks are always good for times like these.  My mom used to call them "Shut-me-ups".  Of course I've adopted that term.

On our way back to get our things, we headed for a glass door which was the entrance to where the lockers were.  Little K had his hand on the door handle; I was just about to help him open it, when on the other side a group of - shall I say - "Tweens" practically bowled him over trying to get out the door from their side.  They clearly saw us, but as it tends to be with some tweens, they have no sense of who's around them.

When this happened I said "Hey, watch out for the little ones."  I didn't even say it how I was feeling it.  I was pretty polite, I thought.

That's when it happened.  A little girl Tween (who by the way I wasn't even speaking to) told me to "Calm down" in the most disrespectful way.

Suddenly I was tranformed...into this: 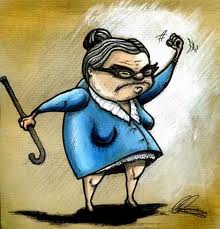 At least in my head this is how I felt.  There were words like "whipper-snapper" and "kids these days" swirling around between my ears.  Of course I kept it together, but my blood was simmering...not quite a full boil, but nontheless hot.  I kept thinking:  I've got to teach my boys respect for their elders.  But then it was like, wait,  I'm an elder??  When did that happen?  I certainly don't feel like one. (Again, unless I'm getting up off the couch.)

So what's the moral to this story?

No, I'm asking...what's the moral to this story?