There's bunny poop on my carpet.

I remember as a kid there was a rumour of a house in the neighbourhood that was full of cat poop.  Of course I have no idea if it was true, but I had images of disgusting piles of fur-filled poop lying in stinky lumps all over the living-room floor of this house and I thought the people living there were disgusting human beings.

Fast-forward 30-something years later and ...

I went and adopted a rabbit.

I've written of him before.

His name is Milo. 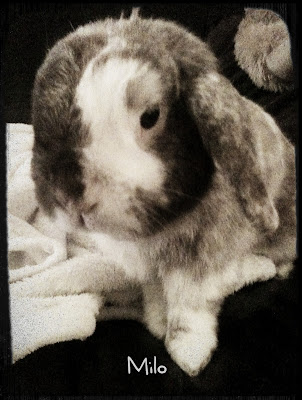 He was Big T's kindergarten bunny who needed a new home.  And since we had him over the Christmas holidays and he was such an amazing 'lil honey bunny, I let the owners know that we'd take him in a heartbeat.  And they took us up on it.

And he is amazing, don't get me wrong.

Here he is watching YouTube videos of cute 'lil bunnies... 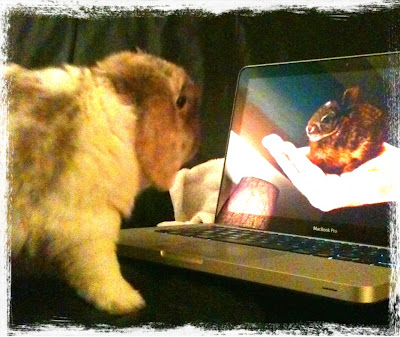 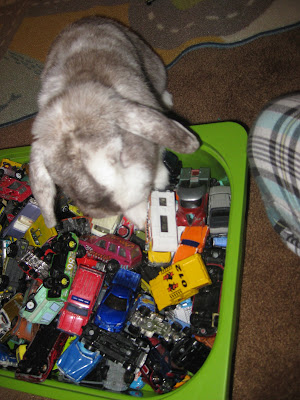 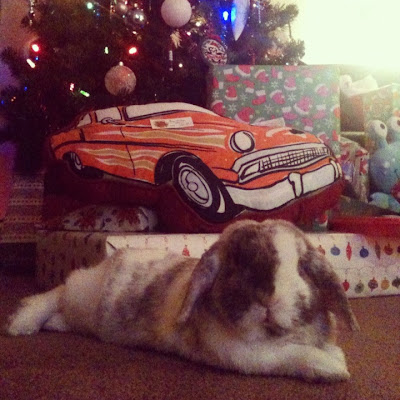 Yes, he is a nice pet.  I thought he would make a great "first pet" for the boys...you know, help teach responsibility and compassion, etc, etc.  Although when they're asked to clean up Milo's poop, I hear "You wanted him"... and ... "You're his Mom"... sigh.  I guess that lesson was a fail.

Anyways, back to my Secret Mommy-hood Confession.

There's bunny poop on my carpet.

But Milo is litter-box trained.  Kind of, sort of.  He pees in there.  That is when he's not showing dominance to Hubby and peeing on him while he's sleeping on the couch.  (insert uncontrollable laughing here)

And most of his poop makes it to the litter box.  Make that litter boxes - yah, he's got two.  You'd think that would make a difference, but this furry 'lil dude drops bombs like you've never seen!  He doesn't even know they're coming out.  Hop, poop, hop, poop, hop, poop ...

I was told he was just a lazy male rabbit.  'Nuff said.

I'll leave you with one last picture of Monsieur Milo.  Notice how nonchalant he is, like he has no idea what I'm going on about.

Posted by Mommy Inconsistent at 1:41 a.m.

He is sooo cute!! {love the pic of him watching bunny videos on YouTube ~ hilarious!}

Although I think animals are definitely cute, after our cat bites the bullet, I am NOT giving in to any requests for a new pet. I think I'll let our kids borrow our friend's pets when they're on vacation instead. :)

We have been relocating bunnies that are eating our garden which had me thinking about my neighbors who had a pet bunny. I used to bunny sit, they are easy to clean up after. Thanks for the cute pictures

I am dying...poop, I don't see no poop! I guess just be happy the pee is in the right place. That is honestly the bigger mess. I also cracked up that he pees on your husband. Male bunnies are funny stuff!!