And The Award Goes To...

Ha!  I wish I could say that I've recently received a blog award, thus explaining the title of this post.

Oh, I don't even really want to tell you; I'm that bummed out about it.

Basically the award I think I should receive is not one that I want or would be proud to display above my non-existent mantel. 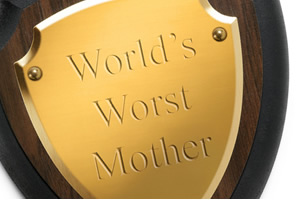 I know what you're thinking.  (Humour me)  With a blog name like "Mommy Inconsistent", how could I ever do something that would award me such a thing?

Basically I scared the crap out of 'Lil K.

We were all visiting my Mom tonight in the care home where she lives.  When we got there, she was in bed, but she was happy to see us and we had a little visit.  One of the care aids came in to give my mom a snack and then quietly asked me if I could rinse out her dentures before I left because my mom wouldn't let her do it earlier.

There was a problem.

I did it in front of my kids.

Yep, had my Mom take her teeth out and hand them to me right in the presence of my two boys.

'Lil K's eyes widened as well, but his face was less than priceless.  Think scared beyond belief that his beloved "GaGa" was taking her teeth right out of her freakin' mouth and handing them to his mother!!  What the ... ??

He proceeded to hop into Hubby's arms and bury his face in his shoulder.

I could not believe myself.  What did I just do??

For starters, I scared him from possibly ever donning a pair of vampire teeth, which are pretty much a necessity if you want to pull off a vampire costume at Halloween.

Secondly, and most importantly, I was worried that he would be afraid of my Mom from here on out.

Luckily I don't think the latter will happen as he gave her a smile and said goodnight to her as we were leaving.  He would not, however, stop asking why Gaga took her teeth out.

"Because Mommy is a bum bum", is what I should've said.  He would've understood that.  Instead I just kept saying that I wanted to wash them.  Then of course I threw in "Because I love my Mom and want to help her out"...I know, pathetic.

Let's just say I don't expect to sleep in my own bed tonight.  And it serves me right.


Come on, make me feel better.

MOOOUUAAAAHHHHHH!!!! too funny! I love you Jill!! You are just so cool.

Yep, one cool mom, that's me. You forgot to mention what stupid mom thing you've done. I know you're just as cool as me - LOL!

hahahah! I probably would have done the same thing ...shaking my head .....and not thought anything about it...oops! I have done some really stupid things but one that stands out....I was at Wal-mart and my oldest was about 2 (maybe a little less). Anyway, it was cold and I didn't want him to have to sit with me while I Ioaded up the groceries. So, instead of being the intelligent mother that I thought I was ....yeah right!....I put him in the front seat to sit and turned on the car to warm up.....yep you guessed it....he locked me out of the car, with it running and a small child in the front seat. Sigh....needless to say we finally got the car uplocked and him out but not until several other shoppers, employees and almost the police helped. You are soooo not alone ;)

Excuse me for LMFAO first... and then just remind you that our dear Gaga, for our entire life, has always had dentures and as I recall would take them out every night before. There had to have been times when one of us kids needed her attention in the middle of the night, like one of your infamous childhood nightmares and chances are she would do so without putting her teeth in first.
That shoulda/coulda made for DOUBLE scary equation and we seemed to have pulled through un-scared.
The best memories I have of growing up with our loving Mommy is that she was never 'inconsistent' when it came to making fun of her occasional, sometimes intentional "toothless grin".

LOL! Yeah, I look forward to the day that she can take them out in that funny way and make the boys laugh instead of cry! It's been 3 days and he's still asking why GaGa took her teeth out. hahaha!

Oh, what a 'lil monkey! I did that when I was single...no kid in the car...just locked while it was running...I was pretty embarrassed. Thanks for sharing this!

I'm pretty sure I wouldn't have thought of it as frightening until afterwards too. I took my girls over to see my mom have she had major surgery and looked like she had been in a car accident. My girls were freaked out until they heard her voice but I wasn't even thinking about how she looked, I just wanted to get over to check in on her.