The Life & Death of a Roley Poley Bug 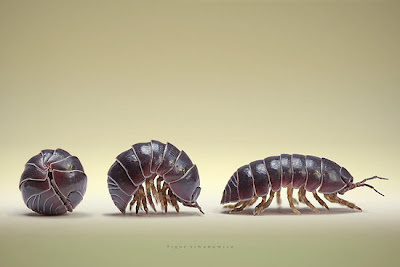 In our house, we refer to them as Roley Poley bugs.

If you're my Little K, however, you call them "My friend(s)"... at least this Spring he's calling them that.  It wasn't long ago he was squishing them under his Lightening McQueen running shoe with what seemed like a little too much zeal for my liking.

We've finally been having some decent weather up here in beautiful British Columbia.  It's been warm enough to head outside, just puttering around the house, which is something I've grown to love, especially since I've started a herb garden.

My boys have been enjoying it as well and the other day Little K noticed a couple of Roley Poley bugs at the side of the garage and called me over.  There were two at the spot where he was...both lying on their backs.  One bug's legs were flailing; the other's legs were still.

Since I'm really trying to instill compassion in my boys these days and to think of others besides themselves (because let's face it, they've got that down pat), I immediately got a small stick and showed him how to help his 'lil friend over onto its feet.

I told him that if we didn't help this 'lil bug off its back, it would die, just as the other one beside it had.

That was basically that and we went on with our day, playing in the sunshine with some friends.

Later that same evening, I was tidying up outside when Little K headed over to the spot he had earlier seen his Roley Poley bug friend.  He immediately came running over to me with the saddest expression on his face, tears welling up in his blue eyes, and cried: "My friend died!"

It took a while to console him.  It was very sweet.  He seemed to feel real grief over the loss of his 'lil buggie buddy.

As I carried him inside, wiping his tears, I thought to myself (with a little dread, I must admit) that I should say something about death and where I believe people/bugs go when they die.  I'm not a religious person but more spiritual and feel that Heaven is here on earth, but that's a bit of a hard concept for a 3-yr-old, in my opinion, and I didn't want to fall back on speaking about Heaven in the traditional sense.

I ended up saying things like: "Your friend had a wonderful life." and "He was so lucky to have a friend like you"...both of which are completely true....well, the wonderful life part, I just imagined.

I asked him if his 'lil friend was there or was he just gone and he wailed "Heeeee's goooonnnneee!"  So then I was able to calm him with, "Well, what makes you think he's died?  Maybe he just went home?"  Upon hearing that, he relaxed and was finally soothed and even laughed a little.

I must say, seeing him with so much compassion and grief over what he thought was his friend dying, was pretty adorable.  It was so unexpected, but a welcome sight as I'm forever telling my boys that we don't kill anything...especially when we're outside in the bug's/worm's/ bee's environment.  (Unless you're a mosquito, a flea or a fruit fly...then you're toast.)

It did make me think though that it's time I get prepared to share my beliefs about what happens to us when we die.  I know what I believe, but to put it in a way that a child will understand seems quite the challenge.

But then again, what part of parenting isn't a challenge?

This is such a hard thing to talk about to our kids. Our cat recently killed a bird, and the toddler saw it. So we had to talk about it. I was not prepared for that conversation. How do you explain these complex things to these little people? It sounds like you handled it very well.

Thanks, Julia. It's definitely something I'm starting to think about.

Oh my! He and Bean could start a bug rescue and grieving center! She is the same way. She loves things completely with in seconds and always has. You are lucky to have a little boy with such a big heart. Just wait until he is 8 like Bean...just when you thought it couldn't get bigger...it does!