I would like to put Sir Toopy (I believe he was knighted by the Queen or some Queen-like character) up for nomination to run as Prime Minister of Canada...and President of the United States.

Oh, and let's not forget Binoo.  I would like to nominate her/him for 2nd in Command. 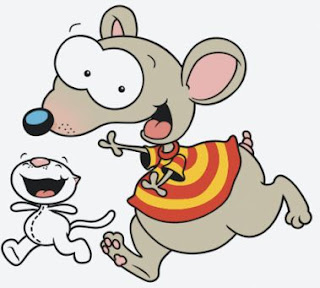 You all know who Toopy is, right?

If you don't, then you're either not a parent or you actually don't use the tv as a babysitter at times.  Since I don't believe there are parents out there like that, then I'm going with you must not be a parent.

Anyhoo, I sincerely think that if Toopy ruled the world, it would be a much nicer place.

Here are 10 reasons I think he/she would be great as our leader:

4) He's/She's great at relating to foreigners, whether it be monsters under the bed, sea serpents in the bath, a fish in his/her boot...whateves.  He/She sees the good in everyone.

6) He/She plays nice with others and is never selfish.

9) He/She sees the beauty in everything around him/her.

10) He/She stands for equality for all.

I think #10 is of the utmost importance.

I have no idea what gender Toopy is - or Binoo for that matter - and I think this is one of the reasons I like the show so much.

In a world where a purple Teletubby becomes global news all because of carrying a bag and a huge controversy ensues regarding his/her sexuality (Really??) I love the fact that we can't really tell with Toopy.  He/She wears a suit of armour and it's okay...a ballerina dress and it's okay.  A princess one day, a policeman the next...and it's all okay.

And really, who cares?

So is there anyone out there who'd like to second Toopy's nomination to be the leader of the free world?

Aww, that sounds like a great idea (a nongendered cartoon character). I've never heard of toopy - is it not easily available in the us, perhaps?

Hubby just told me that Toopy's only in Canada. Whoops! You can find him on YouTube. :)

Ok. i have kids. I do use the tv as a babysitter. but I don't know this person! Who is he/she? Because my kids love Cailiu... and I hate him. and we need to bring some new love in this house! Kristen

The Preppy Girl in Pink said...

Man! It's a shame Toopy & Binoo are not US citizens. Sounds like just what we need in the white house!

If Toopy could get me timely medical care, then I'd vote for it.
Because right now, I'm waiting until April of 2012 to see a surgeon to remove a gallbladder and it's inhabitant tumor...sigh.
God bless our healthcare.
And Toopy of course.