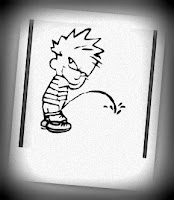 I've decided that this past summer will forever be known as "The Summer of Pee".   There's been lots of it in various locations around our house, inside and out, and around our 'hood.  I'm guessing everyone in our neighbourhood has come across my 'lil blondie taking a leak. I've got to say though, that this pee-filled summer has gone surprisingly well and Little K has mastered the job.  He's still not much of a pooper, preferring a pull-up over porcelian, but he's got peeing down pat.  Throughout the day he yells:  "I gotta go pee!" and then in short order runs into the bathroom, whips out his 'lil man and does his biz right into the bowl....well, kind of into the bowl....okay, a bit into the bowl and the rest on the floor.  Hubby and I have never experienced this with Big T.  His aim was and is that of the most proficient pee-er.  So when we first saw the massive puddle on our bathroom floor, which was a fair ways away from the toilet bowl, we never even thought it could be from Little K.  "I think the toilet's leaking", I said.  But nope, it was my 'lil sweetheart, aiming high and long and no where near the water in the bowl.  I did the Cheerio game too where you throw some Cheerios into the water for a little target practice, but he looked at me like I was a completely crazy lady and he would have none of that.  I think I need to take a bit of the blame for his poor aiming skills.  When we're out and about and the urge hits him, I lead him over to a nearby tree, bush, whatever foilage is the closest.  I always tell him to shoot for the sky (so to speak) so as to avoid his shoes and pants and so he's not sloshing around in wet crocs.  (Yes, that happened too)

There was one day in particular that I will fondly remember.  My usual early morning stupor had its hold on me and before I knew it I was covered in my son's urine.  UGH!  No, he wasn't mad at me and had suddenly perfected his aim.  I had sat down on the toilet, eyes barely open, when suddenly I felt something cold and wet on mee cheeks...aka, my butt.  It took me a minute to realize what it was and when I did, I yelled out:  "OMG, is that pee?"  And sure enough, Little K had soaked the seat.  He forgot to lift it.

I'm sure most women at one time has complained that the man in their life leaves the bathroom after doing his business and neglects to put the seat back down.  We're thinking that our man is selfish, thoughtless, absent-minded and just plain rude, especially when this occurs: 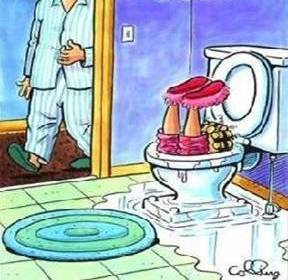 Now, I hate to blame anything on a woman who's a hard-working mother, but I'm thinking a mother is actually at fault here.  We train our 'lil dudes to raise the seat.  In our house, I want the seat to stay up!  Seems to be the only way of ensuring that the pee gets in the bowl and not on my butt the floor.  Once they're older, we'll work on putting the seat down, but for now, it remains up.

So I'm apologizing in advance to my sons' future girlfriends if my sons revert back to their early days of potty-training and are forever leaving the seat up.

Posted by Mommy Inconsistent at 7:21 a.m.

Oh, the thing we moms do for our kids! I've been so lazy with potty training my son. We've tried the stand up a few times, but I've just taught him to go sitting down most of the time. I didn't want pee on his preschool bathroom walls. LOl!

lol! My oldest took forever to get that aim thing down!

And we are just starting to train my middle guy now. Oh, the dread.