The Contents Of My Purse

I don't know about you, but I've always been kind of fascinated about the contents of someone's purse, bag, wallet, man-bag, fanny-pack, etc.

Perhaps I'm just nosy, but I think what a person carries around in their bag says a lot about them.

Now, I would NEVER go ahead and look in someone's bag without asking, but I have actually asked...but not complete strangers (I'm not a freak!), but a girlfriend, for example.  I usually get a wierd look, asked why I want to do that, and then they oblige me.  So far there hasn't been anything wierd in any of the bags...just the ol' boring stuff, wallet, lipstick, phone, maybe the odd tissue.  Nothing to write a blog post about.  (But I'm doing it anyways)

Back in my single days, I kind of took pride in the fact that I was very organized and carried a lot of stuff I might need "just in case".  I was the go-to girl.  If you were in desperate need of something, there was a good chance I had it in my purse.  A Tylenol?  Got it.  A bandaid?  Got it.  Condom....haha!  Okay, there was one thing I wasn't prepared for.

All I can say is that the contents of my purse has changed DRAMATICALLY since becoming a mom.  All sorts of wierd stuff ends up in there.  For example, this is my purse after today... 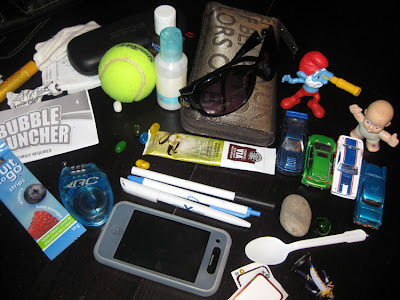 This actually isn't too bad.  There's lots of useful things in there.

You've got your tennis ball for any impromtu tennis match you might partake in.

If a sudden dump of snow happens, despite it being the middle of summer, there's the snowboard/ski lock you'll be needing.

A rock for skipping merrily into the lake you just happen to be sitting next to while eating your fruit leather, followed by some Jelly Bellies 'cuz it's 1pm and you still haven't had hardly any breakfast, let alone lunch.   Oh, and there's the spoon I'm going to need to scoop up said Jelly Bellies from the bottom of my bag.

I see the instructions for that Bubble Launcher piece of crap toy that the boys just got from their Grandma.  That's pretty important to have in there.  It doesn't matter that the toy is absolute shite, doesn't work with or without instructions, leaks all over and is the biggest waste of money.

Look!  A little green marble.  Who doesn't need or want a marble with them at all times?

Aaah, the essential Starbucks Iced Via sample.  No cup and no ice, but that probably doesn't matter since there's a Starbucks on practically every corner of every street in every city around the world.

Let's not forget about Papa Smurf sportin' a telescope and the baby from Toy Story 3.  Smurfs just make people happy and there's that 3rd baby I'm not going to have.

The piece de resistance that every mom should carry...4 Hotwheels cars.  These are essential to combat the whining that will surely ensue once the car enthusiast in your family starts to freak because he didn't bring one single car with him to the park and he NEEEEEEEDS one!

So there we have it.  Guess the only thing this says about me is I'm a mom and a sucker for carrying around other people's things.  Why there isn't any Tylenol in there is beyond me since these days I probably get more headaches than I did when I was single.

What's in your bag?

Posted by Mommy Inconsistent at 8:06 a.m.

Ahaha, Love the Papa Smurf. I usually have a dusty piece of unwrapped gum at the bottom of mine...you know, just incase I need to freshen my breath LOL.