It's official.  I've lost my mind.

I've done something that I can't believe...yet I can believe I did it.  It's just like me to do something like this.  It's so horrible, I don't know if I can write about it.  But I figure I better try because it may just help someone out there who might be on the verge of doing what I just did and I can possibly stop them.

A girlfriend from work, who has a 15-year-old boy, is moving and so told me I could come over and take some toys that he no longer wanted.  It all sounded so innocent.  I'd go over, find a game or two, maybe a stuffy, and that would be it.

But it wasn't it.

It wasn't at all.

He had some toys all right.  Toys I knew Big T especially would like.

I couldn't resist so I brought them home.  (I'm such an enabler)  And now my house looks like this: 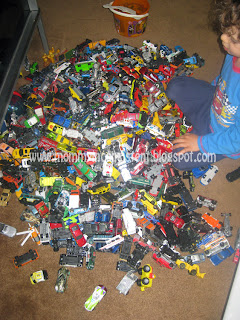 So my plan was to give a couple to him at a time, like if he did something above and beyond (for him anyways)...like clean his room without being asked a million times, watch his attitude, tone, etc., poo in the potty...

And then...he saw the box.  Dangit, Hubby, I told you that wasn't a good enough hiding spot.  That's right, I'm passing the buck.

Oh well, no regrets (well, not really).  What's done is done.  And my son is so happy and the look on his face upon finding the motherload was worth it...I think. 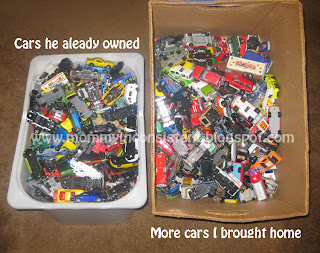 THAT is a s#!% load of Hot Wheels! My boys would love to come across a stash like that!

I know! What's your address, Princess, maybe I'll send you some - haha!

My boys would be so jealous if they saw this. (so they won't!).
I nailed a couple of those fabric shoe organizers to the wall in our play room. (The kind that are meant to hang on a closet door or something.) The pockets are great for the cars. Just thought I'd share, in case you need ideas. LOL.

What a great idea, Busy Mama! I've seen ones like those from Hot Wheels...they hang on a door, but they don't hold very many cars. The shoe organizers would hold lots! Thanks for the tip!