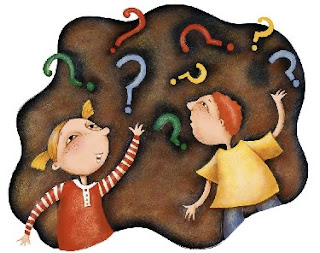 As my boys get older, they are starting to ask questions that I am finding to be a challenge to answer.  Whereas once I worried if I'd be able to answer questions like "What makes a cloud?" or "What's the square root of..." (math has never been my strongest skill), now I'm dealing with questions that I feel are a million times tougher.

The latest, toughest question actually had to do with Santa Clause.  Although I'm not super traditional, I do love the tradition of children believing in Santa for as long as possible.  Santa is as magic as childhood should be.  (Every childhood)  My boys definitely believe in Santa as evidenced by them talking with him on almost a daily basis.  Whenever they see something that they would like, I hear, "Santa, can I have that black corvette/spiderman toy/lego something-or-other for Christmas, please?"  (At least they say please)

The question came after seeing a tv commercial showing poor families in Africa and more specifically children.  My boys were acting particularly selfish this one day (as 'lil kids often do) and I was overly frustrated with all their "I wants", so when that commercial came on, I paused on it.  Of course I am conflicted about this because I don't think my boys should ever feel guilty about what they have, but I also want to instil a sense of gratitude and compassion for those less fortunate then we are.  I want them to feel lucky and, more importantly, thankful.  Of course they were fascinated with the images of the children on the screen and because of my frustration of the day, I eagerly explained that these children didn't have any toys and how lucky my boys are to have what they have.

It wasn't until hours later as we were driving in the car that my eldest son asked me about the children he saw on tv.

Ugh!  I never thought of that.  That's a toughie!  How do I explain this without giving the magic of Santa away?  Santa is supposed to bring toys to all the boys and girls of the world.

I can't even remember what I mumbled about this.  As I recall, Hubby was pretty much silent as well.  I still don't know quite what to say to a 3 and 6 year old with regards to why Santa missed these children.  Did his sleigh break down? (Lame) Did he lose his way? (No, Rudolf would have found them)  Did he forget them? (No way he'd forget them)

Once again, this parenting gig has thrown me for a loop.  I have no problems explaining how babies are made and where they come from.  I tell it like it is.  But Santa?  I am so conflicted with keeping the magic alive and telling the truth.

I'm not sure, either. I really wish I could go back and have Santa only bring each boy one present and have the rest be from us. Then I think it would be easier to explain why some kids don't have much... but since they'd be confused by that now, I'm as stuck as you!

I am in the same sleigh (so to speak). Ash is 10 and still believes and I love it. She is so smart though and is asking questions that I can't answer without destroying that childhood innocence that I want her to hold onto for as long as possible. Kids grow up too fast these days. I say distract the boys with a lollipop. Keep them handy in your purse, car, kitchen...;-)

Ah, lollipops...or as my mum called them "shut-me-ups"...perhaps she was trying to avoid my questions - haha!

I totally agree...I wish I'd done the same. That would've made things a little bit easier...maybe.

Autism As A Whole said...

My girls know the truth and my boys still believe. I think it depends on the child. My older son believes that, we as parents have to give Santa money towards large items. My way of instilling that nothing is free. We also help the less fortunate during the season when we can. By telling him that we have to put money towards some presents it also explains why Santa sometimes cannot go to every house and supply everything each child wants.

Great idea! One thing I do plan on doing - at least to help with the compassion aspect - is when we start giving allowances, I plan on having one tin for saving, one tin for charity and one tin for spending!

Wow, good question from your son! My boys are 6 and 8 and they still believe in Santa. And I hope they never stop believing!

We just adore Santa stories in our house... true magic Darling, but that's how we also answered the question. The answer was always... I'm not sure, but that's how the story goes... maybe that helps? xoxo