Halloweens Past & Present - Part I

I love Halloween.  I always have and I always will.  Loved it as a kid, but what probably really solidified my love for it as an adult was winning a trip to Mexico for 1st prize at a Halloween costume party at a local nightclub with this 'lil number: 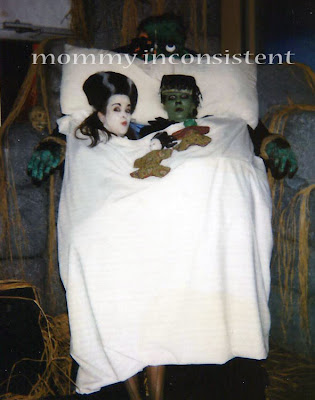 This was my cousin & I as Frankenstein and his Bride.  We strapped a mattress to our backs so it looked like we were lying in bed.  This was in 1987, I think.  Needless to say, we had a great time in Mexico!

Seeing as how we did so well with this costume, we did it again the following year, but with some minor improvements: 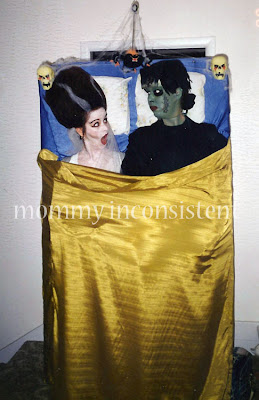 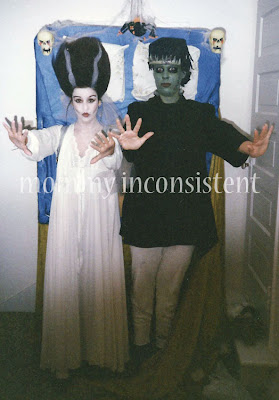 Oh, and before I go on...in case you were wondering...that's my real hair.  Having a brother as a hairdresser is a wonderful thing, but I'm telling you, that was painful...lots of backcombing involved.  It was worth it though because we won again (and at the same nightclub).  This time it was a cash prize of $750.

So you'd think after two years of the bed costume, we'd have been done with it, right?  Well, no.  I guess it wasn't super creative of us, but once again, we lugged that thing around all night.  But this time we looked like this: 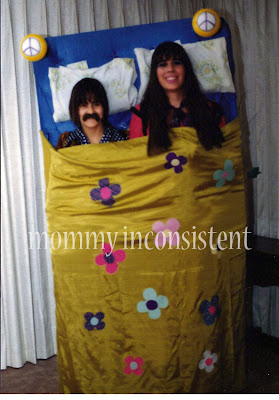 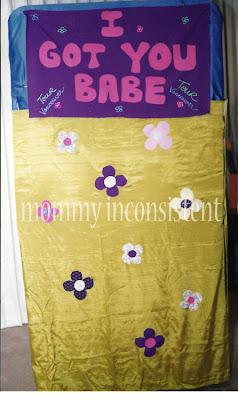 Well, the bed was finally retired, but that didn't stop me from dressing up.  The last big thing I did was in 1999, when a girlfriend and I made this: 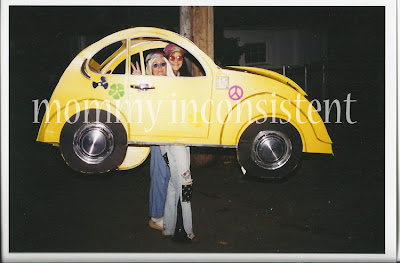 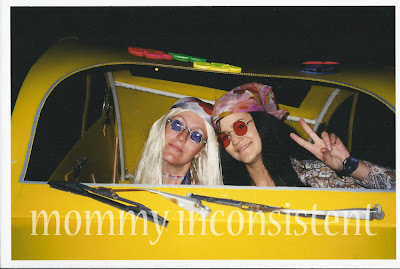 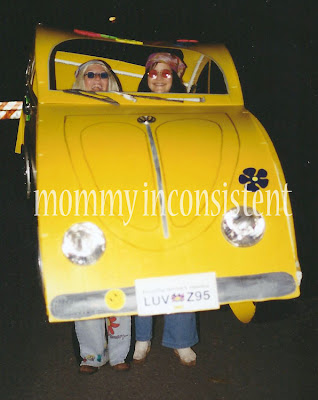 This one was a lot of fun and needed my friend's boyfriend to transport the beetle to the nightclub in his pickup truck.  What a site we were driving down the street.  Not a huge prize here, but we did each win a cell phone, so not bad.  The big prize went to some people who were obviously in the movie biz.  Kind of unfair, but that's okay because we had so much fun making it.  It was pretty crazy in the club too...we'd be driving dancing around the dance floor and all of a sudden there'd be someone in our backseat!  After that night we took the car over to my nephew's preschool playground and they had something new to play with when the arrived to school the next morning.

These days I'm not doing anything quite as big.  Now it's about the kids and throwing them 'lil Halloween parties.  Although I do still dress up...usually am the only "adult" who does.  Went to my 3-yr-old's preschool party this week and he didn't want to dress up.  A mom said to me "With a mom like you, I wonder why he doesn't want to?"  I dunno.  Maybe I'm stealing his thunder.  But he better get used to it, 'cuz I'm not stopping.

So my latest Halloween goal is not to go to a nightclub and try to win a contest...it's No. 1, to get Hubby to love it as much as I do and, No. 2, throw a house party for adults.

Next year!  I've already warned my husband and thought of our costumes!  Can't wait!

Stay tuned for some pics of my boys...'cuz after all, Halloween is really for the kiddies...yah, right.

Posted by Mommy Inconsistent at 1:05 a.m.

If you ever break out the bed again you could do John and Yoko. Maybe when the kids are older and you don't have to chase after them. couldn't do that with a bed on your back, right?

Happy Halloween (I love it, too. So Much!)

Hahaha! John and Yoko is a great idea!

OMGosh, my 9 yr old now wants me to make her a car - love the costumes.
And the hair - awesome!

AMAZING costumes, wasn't that mattress heavy? Any no sitting down, right? So glad you linked up with these pics!

Oh my goodness! Amazing costumes! And I can't believe that's your real hair.

Thanks for the comments everyone! Hoping you all have a great Halloween and get into your kids' goodie bags!

Those are some VERY impressive costumes!

I have never in my life been that clever and boy oh boy did y'all do well!