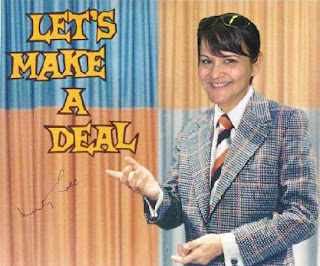 So I'm pretty sure in my past life I was Monty Hall.  I know that doesn't really make any sense considering he is still alive, but you get my drift, I'm sure.

Either that or I am raising some future attorneys the likes of which any legal system has never seen 'cuz, man, my 'lil dudes are fierce negotiators, especially Big T, though I have a feeling Little K is right on his heels.

You know how "they" say (don'tcha just hate "they"?) parents shouldn't use bribery to get their kids to do something?  Generally I agree with this and it sounds so good (in theory), but if you're like me, there are just too many times when I'd much rather say:

"LET ME GO TO THE BATHROOM BY MYSELF AND YOU CAN HAVE A WHOLE LOTTA "C" !!  (This one definitely deserved to be in all caps)

Wouldn't our home the world be a better, more peaceful place with everyone being mutually satisfied in this way?

I know, I know, we don't want our kids only to do things (especially nice things) just because they're going to get something in return.  We want to raise respectful, thoughtful, caring children who don't think only of themselves and what they can get.  We want them to do things because they love and respect us and because we're their mommy who they cherish above all others.  (And they do, right?)

But wouldn't it be great?  And isn't it in a way teaching fairness?  Trading and making deals was the way the world once worked, am I right?  Is that one too many questions?

Rather than call it "bribery", I prefer to call it negotiation.

The definition of negotiation is:

"the act or practice of each side giving up something in order to reach an agreement."

The definition of bribe is:

"something given or promised in order to improperly influence a person's conduct or decision."

Hmmmm, yeah, I'm going with negotiation.  Makes me sound like a better parent.  And we as parents might as well brush up on our negotiation skills 'cuz if your kids are anything like mine (and I'm convinced they're all pretty much the same) they are highly skilled at this fine art of getting what they want.  They're already like mini-lawyers.  Perhaps they've attended some sort of kiddie lawschool that I'm unaware of?  I guess it's just ingrained in them, kind of like when you're on the phone.  There they are, playing ever so nicely and quietly until you get on the phone and then all of a sudden they're hanging off your leg screaming that they need you "NOW, MOM"!!  It's just part of their make-up.  I'm not sure they can even help it.

Big T is getting better and better at making a deal.  He comes up with them all on his own now saying things like:

He always ends it with the word "deal" a few times.  And depending on my mood or state of exhaustion, he makes the deal.  I'm not consistent (surprise!)

All I know is always being the heavy is no fun.  And in a wierd way, I'm kind of proud of his slick negotiating skills.  He knows what he wants and he figures out a way to go get it.  Not always successful, but he never gives up and that's a good thing.

My son has all the Thomas and Friends trains. Why? Because he got a new one every time he went on the potty. I fully trained my 2 year old son in a matter of a week. And I'm damn proud of it. Of course he's moved on from Thomas and is now a Cars fan, so I have to deal with him wanting a new car every time we go to Target. But at least he's not peeing his pants. Do what works for you, that's what I say.