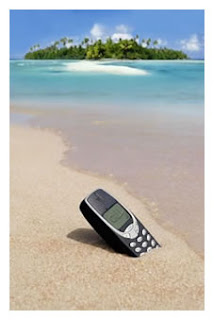 I've been incommunicado for the past couple of days...but what seemed like longer.  I just hope my $500 cell phone is having a lovely time on some white sandy beach...OR is with someone who REALLY needed a phone, but couldn't afford one.  Yes, I lost it.  (Kudos to Hubby for not saying anything about his lack of surprise of this situation, because he says I lose everything).  To my credit though, it is the first cell phone I have ever lost.

I have this habit when I'm driving of putting my phone on my lap.  There's been more than a couple of times when I've done this and subsequently left it in the car.  So that's what I think happened last Saturday as I was taking the bus with a couple of girlfriends.  I checked the time and put it on my lap and I guess just walked off the bus without it.  Upon arriving at my car and noticing it was gone, I was on a mission the likes of which could have made it into a Tom Cruise movie.  I had to CATCH THAT BUS!  It was probably about 30 mins ahead, but with my girlfriend in tow (and clutching the door handle no doubt) we caught up with it.  But no luck...my phone made its way off the bus.

Makes you realize how dependent we are on our cell phones.  First off, who knows anybody's numbers anymore?  It's in the phone...possibly on speed dial...so who needs to remember any more than one digit?  You'd be hard pressed to find a pay phone anymore and when my kids are adults they will probably never have used one in their life.  (Now I really do sound old)  And unless I'm driving ('cuz there's a clock in the car), I have no idea of the time.  Haven't worn a watch in something like 20 years.

I like to 'try' to be positive and give someone the benefit of the doubt and would hope that an honest person out there would try to find the phone's owner.  But with the fancy-schmancy smart phones, these days you don't really have that option.  It's like a credit card.  I felt it better to err on the side of caution and suspend service just in case someone had a hay day with my internet service.

To be honest though, another reason the phone may have "left" me and found its way into someone else's hands is because I didn't love it.

There, I said it.  I didn't love it...I spoke ill of it...I didn't learn about it...I didn't marvel at all its features...I didn't put my full contact list in it - and so it went on to find someone who would appreciate it.  Both of us have moved on to other cellular relationships.

I hope it's found happiness.